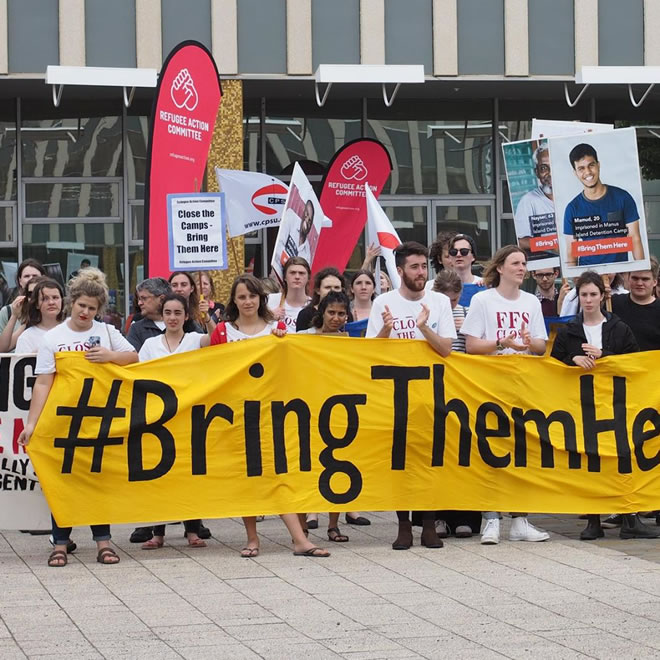 Australia is now officially on the “Road to Recovery” from the COVID-19 pandemic. We have a plan which lays out a pathway for restoring freedom to our daily lives and we have a reasonable understanding of the timescale to complete the journey. There is a broad consensus on the destination and milestones, which gives us hope for the future.

A crisis such as this inevitably strikes hardest at the vulnerable in society, and there are few more vulnerable than those who have been held under Australia’s offshore immigration detention policy for the past seven years. They committed no crime by seeking asylum here and none has been brought before our courts. Sent for “offshore processing”, they are still firmly excluded from our community. Fewer than 800 people subject to this regime have been safely resettled in third countries, most of them in the USA under the deal agreed with the Obama administration. Some are still in PNG and Nauru to this day, and a second group are held in detention in Australia. Out of sight and out of mind, they do not figure in our plan for a “new normal”.

Today, about 400 remain in PNG and Nauru. While they are no longer housed in closed camps, they are not free. Subject to close control by contractors paid by the Department of Home Affairs and dependent upon the Australian Government for care and support, they cannot leave without their permission.

This March, a member of the Canberra Refugee Action Campaign visited the men in Port Moresby who are accommodated in motels and apartments across the city. They were found to be in varying states of depression, with many also having serious physical health problems. With social distancing difficult and in a country with little capacity for testing or treatment, they remain at serious risk of COVID 19 should there be a significant outbreak of the disease.

Although the Government expects to settle more people in the USA, we are approaching the maximum number that can be considered under the deal. There is also no plan to settle the more than 180 people the US government has already rejected, who consequently face indefinite incarceration. There is, however, a straightforward solution – if we are prepared to accept it.

For the past seven years, there has been a standing offer from New Zealand to take up to 150 refugees a year from Australia’s offshore processing system. The Greens, ALP and members of the crossbench have called for this offer to be accepted but the Coalition has used its numbers to prevent it, despite the NZ Government’s agreement to accommodate their principal objection by  banning those settled under this offer from travelling to Australia. Given the offer is limited to refugees already in the Australian system, the suggestion by Minister Dutton that acceptance of the NZ option would provide “ammunition” for people smugglers “marketing New Zealand as a destination” is clearly without merit.

Were we to take up the NZ offer, in conjunction with the US programme, all the refugees now on PNG and Nauru could be resettled, or at least accepted for resettlement, by this time next year. Why, then, does our government continue to oppose it, when it would not only allow Australia to end its offshore processing regime, but also provide a significant saving to the public purse?

In Australia, there are an additional 190 men, women and children who have been transferred from PNG and Nauru for medical attention that could not be provided offshore, mainly under the former Medevac Law. Sadly, only their most serious medical needs have so far been addressed and their condition remains of great concern. Their “Immigration Transition Accommodation” (detention centres and motels modified to act as such) are also high-risk environments during the pandemic and the added stress has led to two incidents of attempted suicide in the past month, as well as other incidents of self-harm. Now they must also face the possibility that their link to the outside world will be severed by the confiscation of their phones under new regulations proposed by the Department of Home Affairs. Moving all of the ex-PNG and Nauru onshore detainees into appropriate community accommodation would surely be a logical and humane step, pending their permanent resettlement, or the grant of a protection visa in Australia.

A crisis can be an opportunity to discard old habits that have outworn their usefulness. If we think we deserve a way out of the limbo we have been in for just three months, how much more do people who have endured seven years without a future? Surely, they have suffered enough. We can choose to take this opportunity to implement a plan for resettlement that gives hope to these vulnerable people, our borders can remain secure and we can use the money saved to help recover from the pandemic.

Are we up for it?